ATREE's Dr C Madegowda has been nominated as a member of the Karnataka Adivasi Abhivrudhi Mandali by the Ministry of Social Welfare, Government of Karnataka.

This board will implement schemes for self employment and economic development for 19 forest based tribal groups in Karnataka, like Soligaru, Koraga, Male Kudiya, Kadu Kuruba, Jenu Kuruba, Eruliga, Hasalaru, Gowdalu, and Yarava. These schemes will include disbursing loans for self employment, entrepreneurship development scheme, microcredit through self help groups, Ganga Kalyana Scheme for irrigation borewells and electricity for irrigation. It is distinct from the larger Karnataka Maharshi Valmiki Scheduled Tribes Development Corporation Limited, which catered to as many as 50 tribal groups.

Dr Madegowda is a social scientist and tribal rights activist from Biligiri Rangaswamy Temple Tiger Reserve (BR Hills) in Karnataka. At ATREE, he is responsible for participatory resource monitoring of sustainable harvesting of non timber forest produce by the Soliga tribal people who live in and around the forests of BRT. He is closely involved with the implementation of the Forest Rights Act in the district by ensuring that his own Soliga and other forest-dwelling tribes in the district obtain rights over their land. 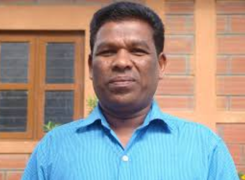