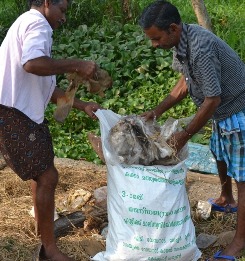 ATREE’s Vembanad Community Environmental Resource Centre has a history of initiating environment-friendly practices that appeal to local stakeholders, and so become a regular calendar event. Examples of this are the annual fish survey, formation of Lake Protection forums, ayilyam makom—revival of a traditional fisher practice of offering prayers for abundant fish, formation of protected areas that serve as fish sanctuaries etc. Three years ago, the team had asked fisherfolk why the physical and spiritual cleansing practice of the Sabrimala Mandala season could not apply to the Vembanad lake as well. After all, the fisherfolk had an intimate relationship with the lake: it was part of them, their lives.

The logic appealed. The third 41-day-long plastic cleaning campaign in connection with the Sabrimala Mandala season was successfully concluded on 29th December 2013 with more than 75 sacks of plastic and other non-degradable collected by fisher-folk and clam collectors. In 2011 and 2012, 45 and 70 sacks, respectively, of plastic had been collected. Shri SD Shibulal, CEO, Infosys, was the chief guest of the valedictory function held on 29th December. He acknowledged the efforts of the fisherfolk, ATREE, Lake Protection Forums and Vembanad Nature Club. As part of the local community, Shri Shibulal said he was pleased and inspired by the projects to restore the lake. The collected plastic will be used for road construction, like it was done in the last two years.