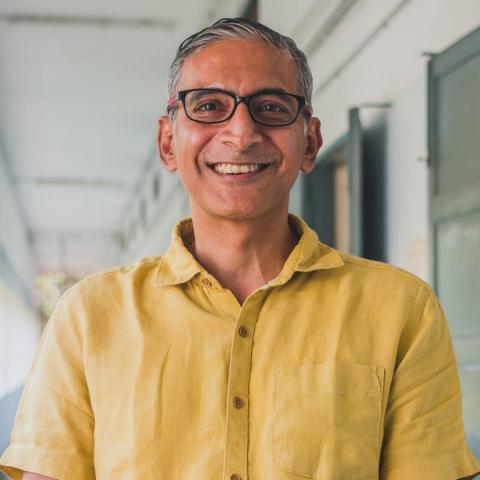 Sudhir Chella Rajan teaches at the Department of Humanities and Social Sciences at IIT Madras. He was formerly Head of the Department (2011-2014) and was Coordinator of the Indo-German Centre for Sustainability (2010-2016) and Area Coordinator for Land-Use (2016-2020). He obtained an inter-disciplinary doctorate in Environmental Science and Engineering from the University of California Los Angeles and has worked in progressively senior positions in government, research consultancies, NGOs and academia. His interests are primarily at the interface of political theory and the environment; in particular, on the new challenges that enter politics within democratic societies in the face of composite social and environmental encounters.

Dr Rajan has worked on emergent policy dilemmas in automobile pollution regulation in California, the politics of power sector reform in developing countries, conflicts in relation to energy access and climate change policy, the patterns of social change needed in transport in the United States for fair climate policy, ethical approaches to addressing climate change and sea level rise, new interpretations of the resource curse in resource-rich developing countries, changes to the periurban landscape in South India and the shifting meanings of corruption in environmental and everyday discourse. His latest book is A Social History of Corruption: Notes from the Indian Subcontinent.

In very broad terms, my intellectual concerns lie at the interface of the environment and political theory. What normative claims do problems such as pollution, climate change, and loss of biodiversity place on human societies, and how adequate or not are prevalent institutional arrangements to respond to them? What does it mean to describe these in emergent socio-technical formations influenced by power dynamics among other factors? How, for instance, does sovereign, territorial power identify legitimate and effective means of environmental governance, and what strategies does it use to navigate among competing concerns? I am also interested in examining situations, particularly in the context of planetary crises, where such state practices run into trouble at the edges of liberal democratic theory, and in exploring whether these boundary concerns in turn shift the terms of political discourse. What roles might, say, emerging practices of food sovereignty play in escaping contemporary settlement camps and other bypasses?

In the past, I have used liberal political philosophy as a lens to investigate the state’s commitment to sustaining automobility in Western democracies, in the face of severe local pollution concerns. I have explored how bodily dispositions such as automobility constitute globalized phenomena having cultural dimensions but are also associated politically with interlocking elite networks.

I do a fair amount of scenario-based analysis on transport, energy and climate change, primarily as a means to provide my conceptual interests a strong grounding in specific policy questions. In this regard, my team and I have built climate and energy scenarios for India, one of which have a strong normative focus on reducing carbon emissions while raising incomes and livelihoods for the bottom quintile. Other work of this nature includes developing sustainable transport policy both in Indian cities and in Eastern Europe and Central Asia, where I have been working in collaboration with respective UNDP offices. Along with Sujatha Byravan, I have been working on sea level rise as a possible driver of political and ethical shifts in the discourse on climate change.

In terms of social and policy impact, my current research, in collaboration with a broader team making up the periurban initiative and PERI-CENE, is to address the many harms arising from bypasses in the hinterland. The pooled threats from industrialized agriculture, new enclosures of land, particularly in developing countries, and risks to local livelihoods from these social forces as well as climate change need to be considered in toto, not by analytically separating climate impacts from all other impacts. Our focus is on creating ‘living laboratories’ of climate resilience through documented trials in community gardening, natural farming and re-use and repair cultures.