The research project 'Pathways towards a sustainable and inclusive Cauvery Delta' is being undertaken for two years in the Cauvery Delta region in the state of Tamil Nadu, Southern India. This is a collaborative effort between the ATREE research team led by Dr. Veena Srinivasan and Prof. dr. Hans Middelkoop and Dr. Andres Verzijl and team from the water, climate and future Deltas hub housed at the Utrecht University. 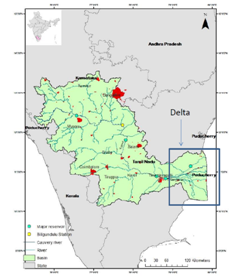 The Cauvery delta is located at the mouth of the 80,000 sq. km Cauvery river basin. Cauvery river, which has its origins in the high elevation, biodiversity-rich Western Ghats, flows through a semi-arid, hot plateau before reaching the delta ( area of nearly 7500 sq. km), which is slightly wetter. While the upstream areas get rainfall from the south-west monsoon between June and September, the delta gets most of its rainfall from the north-east monsoon from October to December, via intense cyclonic storms.
The canal irrigation system in the delta began with the construction of the Grand Anicut by the Chola king at the mouth of the delta. It remains one of the oldest water regulation structures in the world, still in use. Canal irrigation allowed a system of intensive paddy cultivation (often 3 harvests) along with the collapsing system of traditional water harvesting tank-structures, now seen covered with Prosopis Juliflora invasive species. 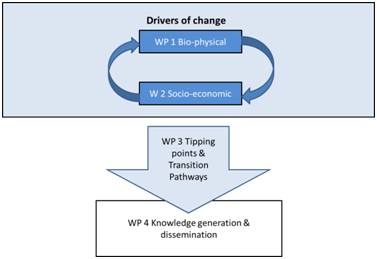 Today, the Cauvery delta is under increasing human and natural pressure. Both global and local change drivers with intensifying human activity, increasing climatic extremes, changing river flow regimes and sea-level rise, have put the delta and the population it supports at increasing risk. Over time, the construction of dozens of large dams upstream has resulted in the decline of streamflow as well as sediment delivery. As surface flows declined, groundwater pumping increased resulting in declining base flows and saltwater intrusion along the coast. At the same time, increasing the frequency of intense cyclones has increased flood risks.

Through this project, the team seeks to understand the interactions between humans, the engineered and the natural systems and identify possible main trajectories and their tipping points. The study is organised around 4 work packages aimed at understanding the interconnection between physical, chemical, biological, institutional and socio-economic processes that interact in deltas through an integrated modelling approach. Along with research, the project seeks to disseminate the knowledge base developed in form of journal articles, blogs/ popular writing, and social media outreach. Capacity building of PhD, Post Doc and Masters students will be achieved through training provided within the project period.