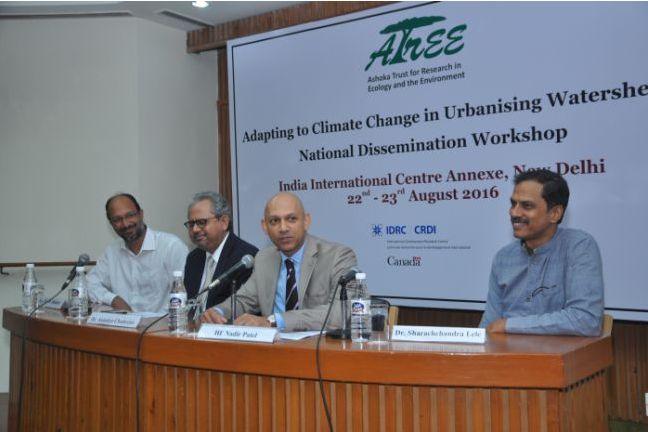 The Water, Land and Society programme of Ashoka Trust for Research in Ecology and the Environment (ATREE) organized a national workshop at India International Centre Annexe in New Delhi during 22nd and 23rd August 2016 as part of its effort to disseminate the findings from the recently concluded 4-year research project 'Adapting to Climate Change in Urbanising Watersheds' (ACCUWa for short). The project, funded by the International Development Research Centre (IDRC), Canada, focused on the urbanising sub-basins of Arkavathy in Karnataka (near Bangalore)and Noyyal in Tamil Nadu (near Coimbatore). The project was designed in the backdrop of increasing water demand, transforming land-use and limited infrastructure in urbanising watersheds leading to a series of changes in hydro-geology, water quality and social responses. Climate change may further complicate the state of affairs.Given these changes, the project aimed at understanding the challenges for sustainable, efficient and fair water management in rapidly urbanizing watersheds.

The research team presented the results of the research pertaining to the hydrological, socio-economic and governance aspects covering the urban, peri urban and rural landscapes in both the sub-basins to a wider audience of experts, academics, practitioners, administrators and donors for their critical comments. The workshop discussed the key policy, action and research issues in improving water management in rapidly urbanizing areas in India in light of climate change.

Dr.SharachchandraLele, Senior Fellow at ATREE and the Principal Investigator for the project pointed out that in developing counties such as India, which are already stressed by inadequate infrastructure, high population and rapidly urbanising and industrialising economies, climate change adds one more stressor to the many already existing stressors, and cannot be viewed in isolation. Similarly, climate resilience is only one of several, often more pressing, concerns such as adequacy, quality, resource sustainability and equity that drive policy and action.. He therefore outlined a multiple concerns, multiple stressors and multi-scale approach which guided the project, and presented the salient findings of the project.The chief guest for the inaugural session His Excellency Nadir Patel, Canadian High Commissioner to India, remarked that the approach of the ACCUWa research team offered a fresh way of looking at the issue of climate and water. Dr.Anindya Chatterjee,Regional Director Asia, IDRC and Dr.KartikShanker, Director, ATREE, also spoke in the inaugural session.

The workshop was organized into three technical sessions where the ACCUWa research team presented results and key insights on (a) hydrology and water quality, (b) agriculture and farmer responses, and (c) urban water governance. In each technical session, a panel of four experts offered detailed comments on the presentations made by the research team, followed by questions from the participants. A synthesis session that was held at the end the technical sessions looked at thebroad findings from the two sub-basins and projections into the future. The workshop concluded with a policy roundtable on climate change adaptation policy under multiple stressors and multiple concerns. 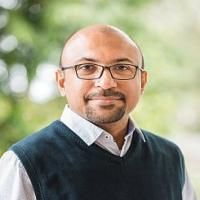 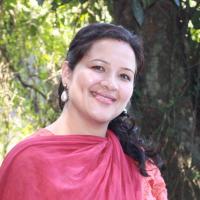